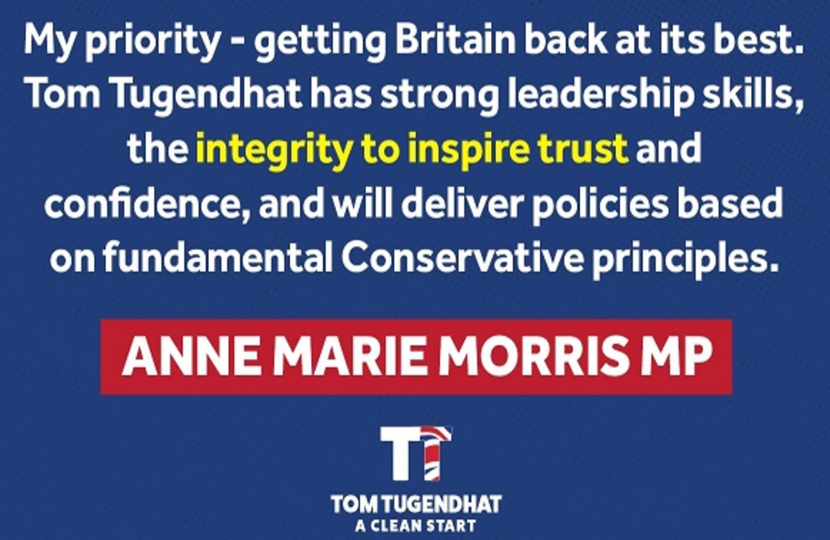 When it comes to the effective functioning of Government, clarity is of the upmost importance. Therefore, after the uncertainty of recent days and weeks, I welcome the Prime Minister’s statement regarding his intention to step down.

The Prime Minister has achieved a number of successes whilst in office, not least getting Brexit done, spearheading the world-first vaccination roll out during Covid, and providing robust support to the people of Ukraine in their time of need.

However, it was clear for a variety of reasons that the trust and confidence in the Prime Minister needed for effective government was no longer there. I thank him for all he has achieved during his time in office and for putting the country first in taking the decision to resign.

Moving forwards, the most important thing now is to conduct a quick and robust leadership election, so that we can get behind a new leader and Prime Minister who can deliver on the Conservative commitments the Government was elected to deliver on at the 2019 election and get on with dealing with the cost of living crisis and the other critical issues of the day.

A number of constituents have asked who I would be supporting in the upcoming leadership contest. Having taken some time to see who would be running and what ideas they have, I have decided to support Tom Tugendhat in his bid to become leader of the Conservative Party and Prime Minister.

For me, it is about having a clean start – moving away from leaders and ministers from my generation towards the more recent intakes and younger candidates. We need to move on from the same old characters and provide space for a fresh face to take over the reins.

Understandably, there are questions around Tom never having held ministerial office. However, I really don’t believe this is a negative, and could indeed be positives. Just take Gordon Brown and Theresa May, both of whom ran major Government departments for 10 and 6 years respectively. With the greatest of respect, neither of the premierships would necessarily be described as a success.

Fundamentally, Tom Tugendhat has strong leadership skills and the integrity to inspire trust and confidence, as shown by his service in the British Army or, more recently, as Chair of the Foreign Affairs select committee here in Parliament.

Not unreasonably, his decision to vote remain during the Brexit referendum is also something that has been raised. However, as a staunch Brexiteer myself, I have no issue with this and know full well that he strongly believes that having left the EU, it is for the UK to make the most of the opportunities that are now afforded to us as a low tax and high growth country.

Furthermore, as a committed supporter of our armed forces, I can think of no greater supporter amongst the leadership candidates for the armed forces than Tom Tugendhat. The first duty of any Prime Minister is the defence of the realm and as we face the challenges of modern warfare moving forwards, we need a candidate who understands this.

Tom Tugendhat is the standout candidate who can provide the clean start that will bring the Party and the country together to deliver better life chances for all: he has my unequivocal support.

If you would like to book a surgery appointment (in-person or virtual) or raise a specific issue, please call my office on 01626 368277 or email annemarie.morris.mp@parliament.uk to arrange an appointment.