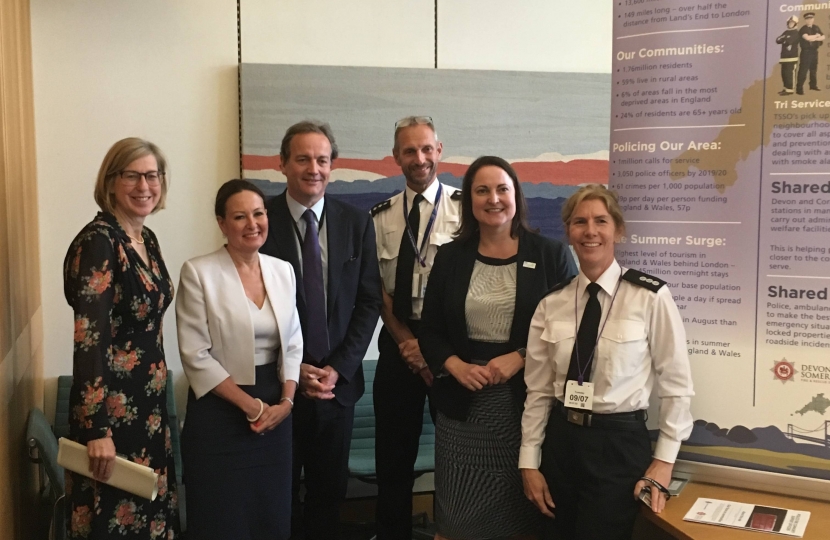 The summer holidays are approaching and in August, the Government will introduce a new railcard for 16-17 year olds, which will entitle them to half price travel on trains across the country. We know that many young people rely on trains to get to school, college, and work and these railcards will ensure that rail fares are affordable for young people and their parents across the country. It will be introduced in time for the new school year in September and in total, 1.2 million young people are expected to benefit from this new railcard.

On Tuesday it was a pleasure to attend a Parliamentary drop-in session held by the Devon & Cornwall Police & Crime Commissioner, Alison Hernandez, and representatives from both D&C Police and Devon & Somerset Fire and Rescue service. The purpose of the session was to explain how emergency services collaboration and innovation in Devon and Cornwall has created new roles like the Community Responder to provide a service in more rural parts of the force area. This innovative police and fire collaboration project is funded by the Police and Crime Commissioner and is designed to improve access to the emergency services for communities in Devon.

The Public Accounts Committee this week looked at the effectiveness of Official Development Assistance (ODA). The government is committed to spending 0.7 per cent of UK gross national income on overseas aid. A recent National Audit Office report has concluded that the government needs to do more to demonstrate that its £14bn of spending each year on ODA is effective and contributing sufficiently to the UK Aid Strategy.

The report also found that there is a lack of sufficient monitoring across government with neither the Department for International Development (DFID) and the Treasury assessing whether allocating the ODA budget to other departments has has the impact intended. Committee members and I questioned the heads of DFID, the Foreign and Commonwealth Office, the Treasury, and the Department for Business, Energy, and Industrial Strategy, about the effectiveness, impact, and transparency of ODA spending. More can be done to ensure this money is used to effectively strengthen global peace, security, and governance and tackle extreme poverty in developing countries.

The current education funding formula puts schools in Devon at considerable financial disadvantage. This is both deeply unfair and simply perpetuates the myth that central government focuses a disproportionate amount of time and resources on urban areas. To continue my work to tackle this, last week I met with headteachers from Teign School, Coombeshead Academy, Newton Abbot College, Starcross Primary and Teignmouth Community School. We discussed school funding and the specific situations in their schools. Of particular concern is the lack of long-term funding provision from the Department for Education. Providing schools with a longer-term future financial settlement would enable schools to make best use of the money they receive and plan accordingly.

Another area of concern is the erosion of specific support for those children will special educational needs. The number of successful judgements by the local authority have reduced, they’re taking longer to make the judgements and there is evidence that pupils are being downgraded in their assessments in order to save money. This is completely unacceptable.

Funding for post-16 education has dropped, therefore making it an absolute financial drain on schools to offer six form education. This is completely counter intuitive because, as the headteachers pointed out, there is clear evidence that having a six form in a school improves the ethos, culture and ambition of the rest of the pupils.

I therefore call on the next Prime Minister to make the fair funding of our schools an absolute key priority of their premiership. Temporary sticking plasters are not the answer; a dedicated long-term funding plan is.

My next surgery is on Friday 26th July in Newton Abbot. Please call my office on 01626 368277 to arrange an appointment.