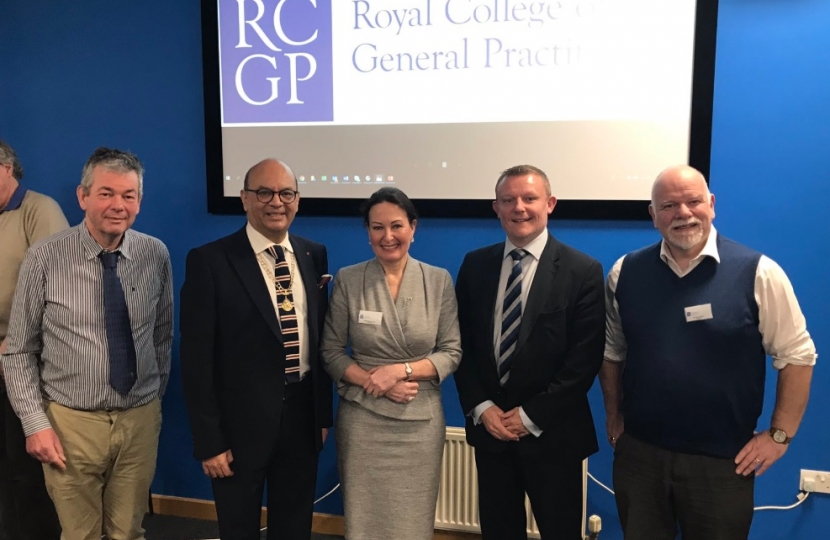 After a number of constituents wrote to me, I attended on their behalf the upcoming Parliamentary debate on ME or ‘chronic fatigue syndrome’. This matters to me personally as a close member of my family suffers from this condition. This vital debate highlighted the fact that there is currently no cure, and many with the condition experience inadequate care and support. Therefore, I welcome ME Awareness Week, and I hope it helps more people understand this condition, which can be so frustrating and distressing for many. I strong believe that patients should be involved in decision-making throughout every stage of their care.

In my capacity as Chair of the All Party Parliamentary Group on Access to Medicines and Medical Devices I met with Sir Andrew Dillon, Chief Executive of the National Institute for Health and Care Excellence last week. We had a very productive discussion on the future of life sciences and how our health service can support patient access to medicines as more innovative but expensive treatments become available. Pharmaceuticals and life sciences are a critical part of the UK economy for jobs and the health of the population; we need to ensure the sector is supported to grow and innovate in the future.

This week, the Public Accounts Committee held sessions looking at the work of the Bank of England and Ofsted. In light of the Bank’s expanding responsibilities, the Committee looked at how officials plan to reduce cost and make existing services more efficient. This was a result of a recent NAO report which found that in some areas the Bank’s central services are relatively expensive compared to other bodies operating in central government. The Ofsted session followed up with HM Chief Inspector on the Government’s responses to the Committee’s recommendations following our previous session with Ofsted.

I was delighted to meet with Cllr Andrea Davis, new Chair of the Peninsula Rail Task Force to discuss ongoing railway issues in the South West, including Dawlish. The Task Force’s number one priority remains action along the Dawlish seawall and we continue to seek confirmation of the delivery programme and acceleration of delivery. I also met with the Rail Minister, Andrew Jones, and Secretary of State for Transport, Chris Grayling, to discuss these issues and to lobby them on firm funding commitments for the line and a clear timetable for delivery.

On Tuesday, Devon & Cornwall Police and Crime Commissioner Alison Hernandez and Chief Constable, Shaun Sawyer were in Parliament to brief MPs on key developments, including the police funding settlement for 2019/20, local policing priorities and performance and national issues. Funding per head of population in Devon & Cornwall remains lower than the average for comparable rural and costal forces. Despite this, the force have been able to make some positive improvements, including placing an additional neighbourhood police officer in every policing sector.

Last week was Cervical Cancer Prevention week, with the Jo’s cervical cancer trust highlighting their #SmearForSmear campaign. The number of women going for smear tests is lower than ever, therefore it is vital to get the message across that these tests save lives. Following the late Natasha Sale’s petition on lowering the age of smear tests reaching 100,000 signatures, the issue is to be debated in Parliament.

On Saturday, I attended the Royal College of GP’s Rural Forum Conference in Shrewsbury, in my capacity as Chair of the All Party Parliamentary Group on Rural Health and Social Care. I spoke about the role of the APPG and its ongoing Parliamentary Inquiry and what it hopes to deliver, for rural areas such as ours. I also more generally spoke about the challenges faced in delivering rural health and social care and the need for the publication of the Social Care Green Paper as soon as possible.

My next surgery is on Friday 8th February in Newton Abbot. Please call my office on 01626 368277 to arrange an appointment.