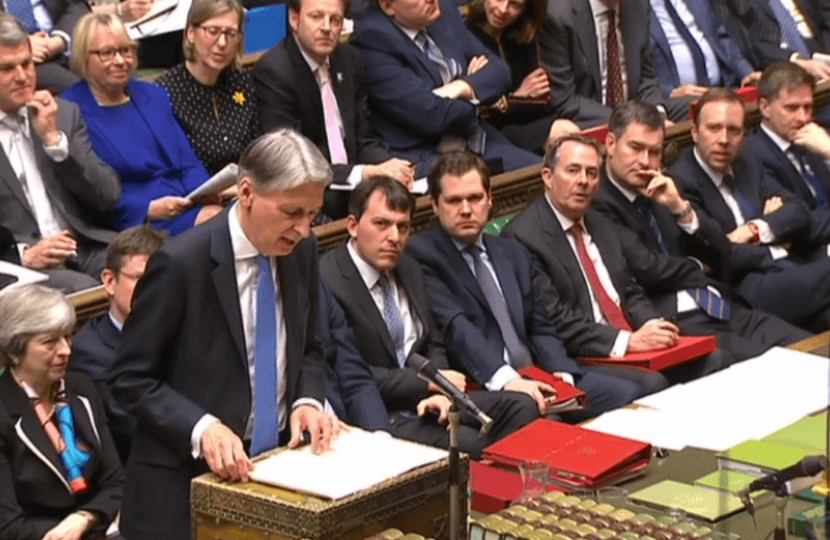 The Chancellor made his Spring Statement last week, reporting on the strong growth of our economy and our record-low unemployment. ONS figures released last week show Britain’s exports are booming. Exports rose 11.5% in the past year, with service exports up 10.1% and goods exports up 12.6%. The manufacturing sector has also entered a record 9th consecutive month of growth - the longest period of manufacturing growth in 50 years.

Last Monday, I attended the Human Trafficking Foundation’s forum that brought together community groups and charities that support victims of trafficking and modern slavery. The forum heard from Miriam Minty at the Home Office about the improvements being made to the National Referral Mechanism. I raised with Miriam the problem of a lack of awareness of modern slavery within communities and among first responders in local government.

I spoke in PMQs to thank the Prime Minister for her own work in championing the issue of modern slavery. However, I highlighted the shortcomings of her law enforcement policy; 65 prosecutions of traffickers were abandoned last year because victims feared for their safety and no reparations orders were made against convicted traffickers to compensate victims for their ordeals. More perpetrators need to be brought to justice to tackle this crime.

The Public Accounts Committee (PAC) this week examined the Government’s Defence Equipment Plan and the Higher Education Market. Ministry of Defence officials were questioned on how the Department plans to deliver its equipment plan in a financially sustainably way over the long term. Representatives from the Department for Education and Office for Students were asked how they will ensure that the higher education market works to the benefit of those paying into it.

On Monday, I met with George Eustice, Minister for Agriculture, Fisheries, and Food, for a briefing on proposals for agriculture and fisheries reform post-Brexit. We will be regaining control over our fish stocks and a new quota system is to be implemented, giving a fairer share to our fishing communities. Tackling the discard problem is a priority for the Government in this area. The payment system for farmers is also to be redesigned to prioritise productivity and environmental sustainability.

I signed a joint letter last week to Ester McVey, Secretary of State for Work and Pensions, asking her to lift the £700 cap currently imposed on funeral expenses within the Social Fund Funeral Payment. This cap has been in place for fifteen years. Over the same period, funeral costs have more than doubled. The funeral fund provides an important lifeline to those in the most acute financial need and the Government can do more to help grieving families on low incomes provide a simple, respectful funeral for their loved one.

The ‘Redeeming Our Communities’ Dawlish Action Group held a meeting last week where I gave an update on the work I am doing to improve the integration of the voluntary sector in Sustainability and Transformation Plans. This has included highlighting the essential role volunteers play in delivering health and social care services in rural areas during a session of the Public Accounts Committee, speaking up about community transport groups in the Commons, and holding meetings with healthcare officials from across Devon. This included a meeting last week where I met Sir Richard Ibbotson, Torbay and South Devon NHS Foundation Trust Chairman, and Ann Wagner, Director of Strategy and Improvement, to discuss Torbay hospital and managing the winter crisis.