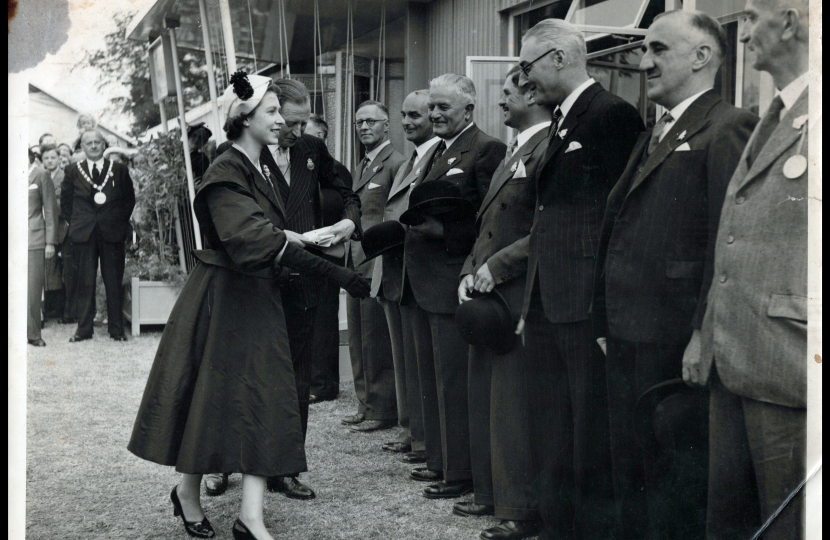 This week I know many of us are looking forward to a long weekend of celebrations in honour of Her Majesty and the Platinum Jubilee which marks 70 years on the throne. Queen Elizabeth II will be the first monarch to reach the milestone.

Though the Queen actually acceded to the throne in the February, across the country people will be taking to the streets and village greens for street parties, afternoon teas and musical celebrations this week, hopefully in some June sunshine. Teignbridge knows how to throw a good celebration and I know that we have many huge supporters of the Royal Family who will be keen to get out and celebrate Her Majesty. At this milestone, I thought it would be good to take a look back at when Her Majesty has visited the good people of Teignbridge during her reign.

In July 1952, Queen Elizabeth II made the first visit of a reigning Monarch to Newton Abbot in 300 years! This was the first provincial town the Queen visited since she took to the throne in the February.

The Royal Train arrived at the newly decorated station at Newton Abbot in the morning where the Queen was greeted by 50,000 people who packed the streets and Courtenay Park to welcome her.

Her Majesty first met with the dignitaries led by the High Sheriff of Devon, Sir Reginald Leeds, and the Chairman of the Newton Abbot Urban District Council, Cllr. Norman P. Roberts. She then proceeded to visit Courtenay Park to inspect a Guard of Honour headed by the Royal Artillery Band; and to be welcomed by the large group of local school children and families who had been waiting patiently for their first glimpse of their new young Queen. The first couple to arrive in Courtenay Park appeared that morning at 5.15am.

After inspecting the Guard of Honour, The Queen was then driven slowly through the decorated streets of Newton Abbot town centre to the Royal Show Ground at Stover for the Royal Agricultural Show where thousands were waiting to greet her.

At the Royal Show, as the Queen passed through the crowds on her way from the gymkhana to the Milk Marketing Board pavilion, young girl pressed her way to the front of the crowd and remarked that the Queen wasn’t wearing her crown. The Queen said “No, I have left it at home today” with a smile.

Her Majesty also took time to award medals and trophies to farm workers including to William Henry Charles Miller who had completed 57 years of service working as a horseman at Rew’s Farm, Newton Abbot.

On 5 August 1977 Her Majesty returned to Newton Abbot for a more fleeting visit during which the MDA described that “the gleaming black limousines drove along the route much quicker than anticipated”. Though the dignitaries were back out on an official platform, the Queen was more taken by the large group of children waiting beside the road in patriotic attire and wielding Union Jacks.

Her Majesty’s most recent visit was in 1980 to commemorate the refurbishment of Forde House, where King George I had been entertained in the Parlour in 1625. On this sunny day, the Queen, accompanied by Prince Philip, was also shown to the room where William of Orange had slept in 1688. During his visit he had proclaimed, for the first time in Newton Abbot, of his intention to become King of England.

However you are celebrating, be it following the Queen’s footsteps into Courteney Park for the ‘Party in the Park’, catching some of the entertainment on the Den in Teignmouth or enjoying a ‘Big Jubilee Lunch’ on the Lawn in Dawlish, I wish you a fantastic long Jubilee weekend.

With special thanks to Newton Abbot Museum for their assistance with this research and for the accompanying photograph.