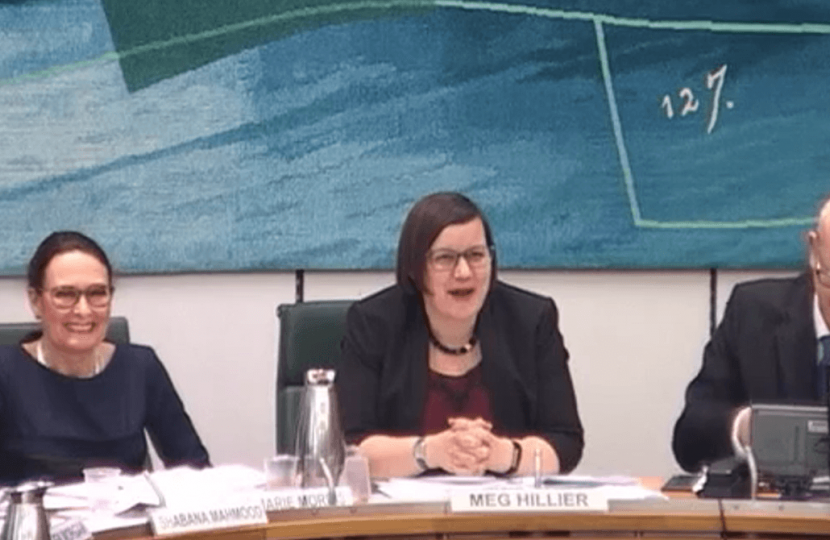 The Prime Minister gave an important speech during recess outlining our continuing security relationship with our European neighbours. Practical co-operation which facilitates faster and more efficient means to convict serious criminals will still continue as we leave the EU, as well as co-operation between law enforcement agencies to share expertise and intelligence. The UK remains committed to European security and we will work closely with our neighbours to keep ourselves safe.

Last week I was delighted to re-join the Public Accounts Select Committee and attended a busy day of evidence sessions in Portcullis House on Wednesday. The Public Accounts Committee scrutinises the efficiency and effectiveness of public spending and holds the government and its civil servants to account for the delivery of public services. Last week’s sessions focused on the Modern Slavery Strategy and the Emergency Services Network, the new communication system used by our emergency services.

In Westminster, my campaigning for fair funding for Devon schools also continues. I sent a letter to Nick Gibb, Minister for School Standards, on the continuing under-funding of Devon schools under the funding formula. I raised the concerns outlined in a recent paper published by local secondary and primary school head teachers.

Our fears over the dredging and depositing of silt off of Sprey Point have materialised and the dumped material has washed up on Teignmouth’s beaches. In spite of raising safety concerns over the suitability of material deposited and the methodology of the collection of samples with the Marine Management Agency (MMO), the Minister Thérese Coffey, and the Environment Agency, our requests for delays to the operation were not accepted.

I have been in contact with the MMO, Thérèse Coffey, and the Environment Agency as a matter of urgency regarding the situation. The Environment Agency is taking samples from the beach and will be advising on the clean-up operation. I have asked for all stakeholders to have detailed information of this testing and for the inclusion of more local stakeholders in agreeing the next steps for any dredging and deposits. All further dredging and deposits at Sprey Point need to be postponed until we have cast-iron assurances and guarantees have been received that it is safe to do so. This is a situation that must not be repeated going forward.

During recess, I met with Oliver Cardall from the Custom Dental Laboratory to hear about their services for care home residents. The Ipplepen-based lab produce labelled dentures to ensure dentures are not misplaced or mixed up among residents. 70% of people in care homes have dementia or severe memory problems so simple, innovative solutions being developed by local companies is excellent to hear about.

I attended a meeting of the Parish Council during recess and discussed the broadband roll-out locally, the blight of fly-tipping on our area, and the expected benefits to Devon of being included in the pilot scheme to keep 100% of business rates.

I also met with Sally Henley, Newton Abbot’s Town Development Planner, to discuss the funding opportunities available for our community. I was disappointed to hear about the delays made to the opening of the bidding process for the Coastal Community Fund and have written to Sajid Javid to enquire as to when in 2018 community teams will be able to apply for this fund.

In good news, I was delighted to hear about the success of Teignbridge District Council in their bid to secure £2.5 million from the Land Release Fund for a new housing development on Bradley Lane. This funding will unlock land for 170 homes that would otherwise not be viable and supports over 100 skilled jobs in Newton Abbot. The projects being supported through Land Release Fund show how local and central government can effectively work together to transform our local communities.