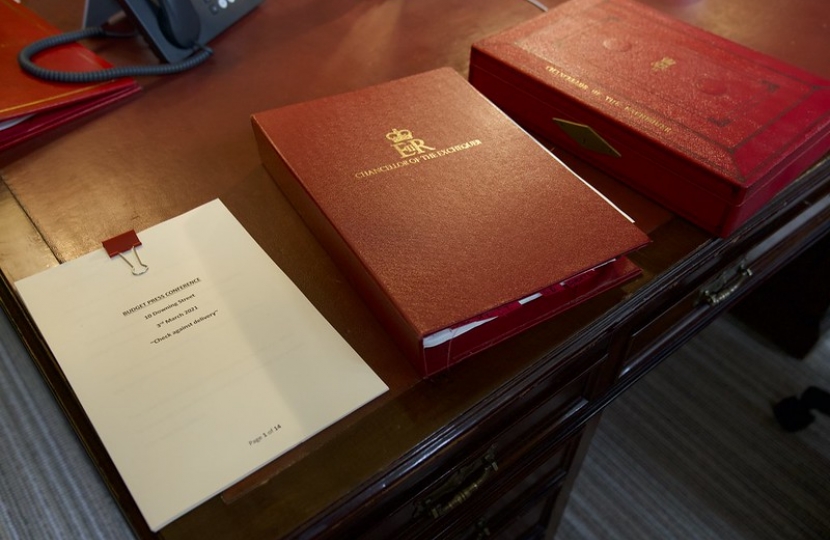 Today saw the Chancellor of the Exchequer, Rishi Sunak, set out the government’s Budget for 2021. The last year has been incredibly tough for individuals, families, businesses and the country as a whole, so it was critical that the Chancellor set out a budget which focused on protecting the jobs and livelihoods of the British people. This was about looking at the short-term measures relating to the pandemic whilst also looking at the longer term recovery process and making the United Kingdom a global leader in research, innovation and a fantastic place to invest.

The furlough scheme has supported 11.2 million jobs across the UK, so I very much welcome the extension of the scheme until the end of September. Employees will continue to receive 80 per cent of wages for hours not worked, but as businesses reopen, employers will be asked to contribute 10 per cent of wages in July, and 20 per cent in August and September.

For the self-employed, the Chancellor announced a fourth grant covering the period February to April, worth 80 per cent of people’s average monthly revenues. From May, a targeted fifth grant will be available: people whose turnover has fallen by more than 30 per cent will receive the 80 per cent grant, while those whose turnover has fallen by less than 30 per cent will receive a 30 per cent grant. In good news, those who became self-employed last year, and filed their 19/20 tax return by 2nd March, will now be eligible for both grants. Less good is the continued lack of support for those who are considered ‘excluded’, especially those who pay themselves through dividends.

The Chancellor has creased Restart grants to help our businesses get going again. Non-essential retail businesses will open first and therefore receive grants of up to £6,000, while hospitality and leisure businesses – including personal care, hairdressers and gyms – will likely open later or with more restrictions and so receive grants of up to £18,000. The government are also providing local councils with £425 million discretionary funding to support other local businesses.

This year, the government will continue the Business Rates holiday 100 per cent holiday for the first three months until June, before cutting rates by two-thirds for the remaining nine months, up to a maximum £2 million per business. Over 350,000 properties will pay nothing for three months, with the vast majority of businesses will receive a 75 per cent cut in their bill next year – a tax cut worth £6 billion.

A new mortgage guarantee scheme for homebuyers has been introduced because, even with the stamp duty cut, there is still a significant barrier for people to get on the housing ladder. That is why, from April, lenders who commit to providing loan-to-value ratios of between 91 to 95 per cent can get a government guarantee on the full value of those mortgages.

The government are introducing new Recovery Loans to take the place of existing loan schemes. These will be loans from £25,000 up to £10 million, with an 80 per cent government guarantee.

The temporary £20 uplift to Universal Credit will continue for a further six months. Due to the way the system works operationally, Working Tax Credits claimants will receive their equivalent of 6 months of support through a one-off payment of £500. The National Living Wage is also being increased from April to £8.91 from April.

The Budget doubles the incentive payment to small businesses to take on apprentices of any age to £3,000, alongside £126 million to triple the number of traineeships next year. This will enable better skills for people to get better jobs.

The Chancellor was completely honest about the fact that the economy and public finances have been hit hard by the Coronavirus pandemic. To give an example, in five years’ time, the Office for Budget Responsibility (OBR) still expect the economy to be 3 per cent smaller than it would otherwise have been. Debt and borrowing have shot up – this year we have borrowed £355 billion, or 17 per cent of GDP, and next year we are forecast to borrow a further £234 billion, or over 10 per cent of GDP. This is why the Chancellor also announced a range of measures to protect our finances in the longer term.

From 2023, the rate of corporation tax paid on large company profits will increase to 25 per cent. In total, 90 per cent of businesses will pay less than the 25 per cent. By definition, any struggling business will be unaffected because corporation tax is charged on profits. Furthermore, HMT will create a Small Profits Rate, maintained at the current rate of 19 per cent, for businesses with profits less than £50,000 – this means nearly 70 per cent of businesses will be completely unaffected. There will also be a taper above £50,000, so businesses only start paying the full rate on profits from £250,000.

Personal tax thresholds will increase in April and then reman at that level. The Income Tax Personal Allowance has doubled over the last decade to £12,500, standing now as the highest basic personal tax allowance of any G20 country and meaning a typical basic rate taxpayer now pays £1,200 less tax than in 2010. Next year, it will rise in line with inflation to £12,570 – but HMT will keep it at this higher level until April 2026. Similarly, the Higher Rate will also increase next year to £50,270 until April 2026.

It is great to see that the government are standing by our manifesto pledge not to increase Income Tax, NICs or VAT and are also freezing alcohol and fuel duty. Likewise, it is welcome that the government will also maintain inheritance, CGT and the pensions lifetime allowances, and the VAT threshold at present levels.

In terms of encouraging business growth, I very much support the proposed ‘Super Deduction’, which is designed to encourage companies to invest now and unlock their cash reserves. Historically, the UK has invested a lot less than our peers, but investment drives innovation, productivity and growth. That is why, for the next two years, when companies invest, they can reduce their tax bill by 130 per cent of the cost of that investment, lifting business investment by 10 per cent.

The government will provide an additional £10 million in 2021-22 to the Armed Forces Covenant Fund Trust to deliver charitable projects and initiatives across the UK that support veterans with mental health needs, ensuring that veterans can access the services and support that they deserve. Whilst this is very much welcome, I would have liked to have seen more financial support for mental health generally and a commitment to achieving parity of esteem. I hope this is rectified later in the year when further health & social care announcements are expected.

The government will provide an additional £19 million towards tackling domestic abuse, including £15 million in 2021-22 across England and Wales to increase funding for perpetrator programmes that work with offenders to reduce the risk of abuse continuing, and £4 million between 2021-22 and 2022-23 to trial a network of ‘Respite Rooms’ across England to provide specialist support for homeless women facing severe disadvantage.

It is crucial that the policy of ‘Levelling up’ is more than just a buzzword and actually has an impact. Therefore, I welcome schemes such as the Community Ownership Fund to help communities buy local assets such as pubs and the Levelling Up Fund, designed to fund the infrastructure of everyday life.

Freeports are an opportunity to encourage free trade and bring investment to all regions of the country through lower taxes and cheaper customs, and it is fantastic news for the South West that Plymouth, has been selected as one of the sites.

Boosting productivity post-Covid is vital for the economy here in Teignbridge and I very much hope local businesses will take advantage of the new Help to Grow scheme, designed to boost the productivity of our small businesses. Too often our brilliant small firms don’t have the time or resources to get the extra skills they need to be more productive.

The new Help to Grow: Management scheme will help SMEs get world-class management training through government-funded programmes delivered through business schools, with businesses contributing only £750, just 10 per cent of the overall cost of the course.

Help to Grow: Digital will level up the digital skills of our small businesses with a voucher entitling them to 50 per cent off the purchase of new productivity-enhancing software.

Overall, this Budget has delivered a very welcome and much needed package of measures, focused on protecting the jobs and livelihoods of the British people both in the short term as we re-open post-pandemic but also in the longer term as we rebuild the economy and make areas such as Teignbridge an attractive place to live and work.