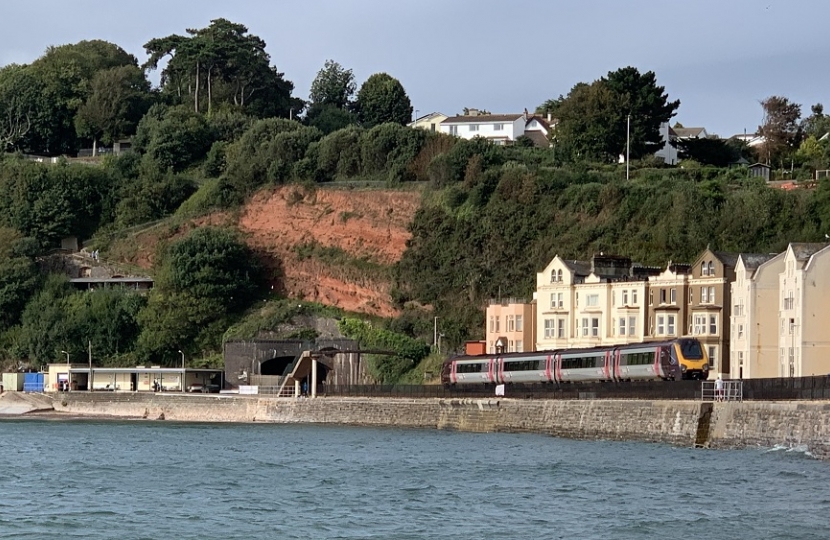 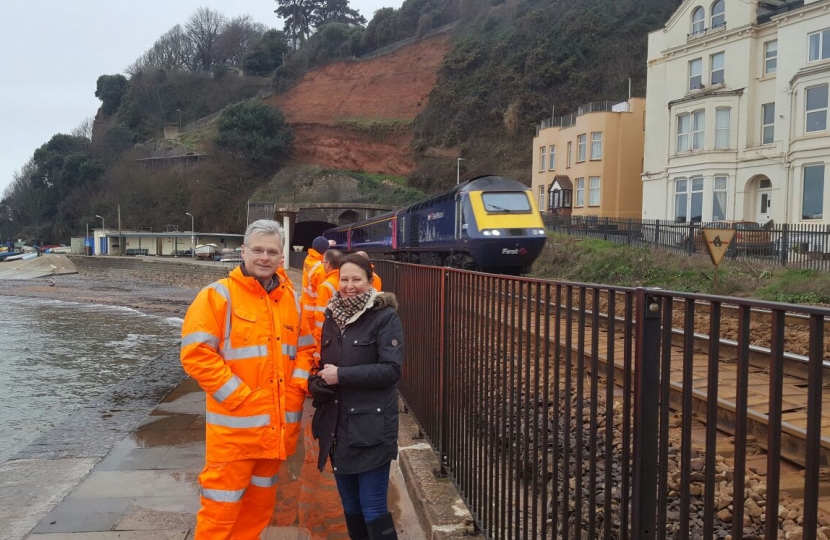 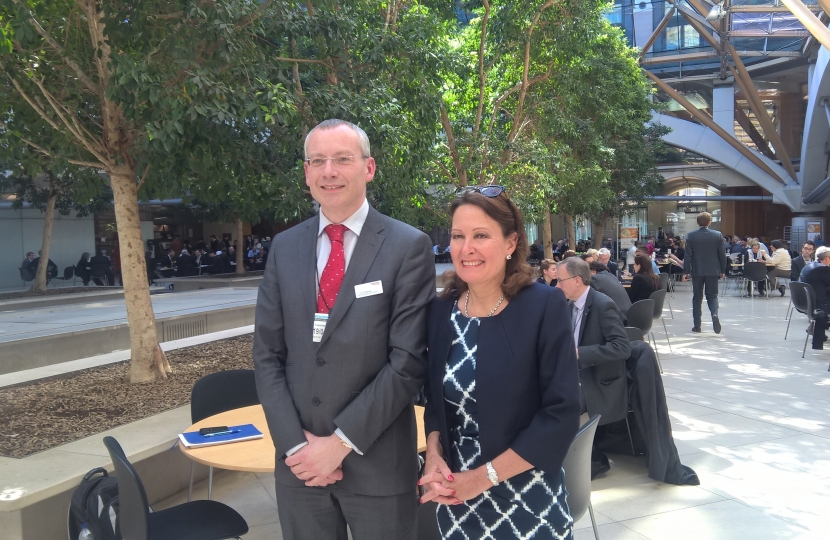 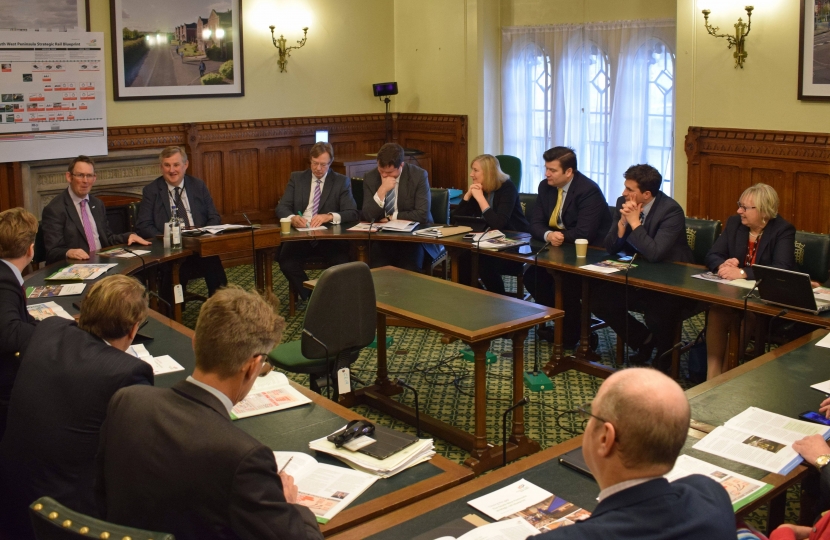 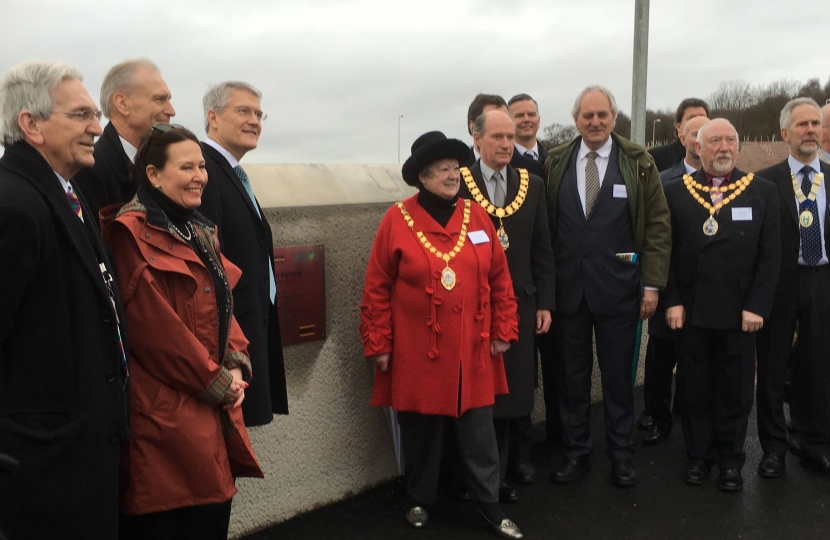 Without roads, railways and the internet the attractiveness of a place for investment and job creation is small. As the Devon representing our interests on the Local Enterprise Partership – the Heart of the South West covering Devon and Somerset I have been working with the business community and county council to lobby for money for roads, the railway and other infrastructure projects. The Dawlish railway line is the priority. The promise I extracted fom David Cameron has been delivered!

The initial works to repair the storm damage are now complete. Additional works on the sea wall at the station have been started which when completed will futureproof the line. Works on the tunnels to deal with rock fall and on the railway as it passes Teignmouth cliffs is still being assessed. Initial plans to push the railway line out into the sea have been adjusted to save as much of Holcombe beach as possible following lobbying from me and public outcry. Further investigations are in hand and a drop in centre for concerns has now opened just by Dawlish station.

Having lobbied hard we now have the South Devon link road which has radically improved journey times between Newton Abbot and Torbay. We are very close to approving work for the Stonehenge tunnel which will start the work to improve road access to Devon on the A303. But my attention is now firmly focused on the traffic jams in our town centres caused by housing developments and poor planning. Highweek has been particularly badly affected and this must be stopped.

But without broadband and a good phone signal many businesses simply cannot compete in today's world. I have successfully worked with local communities to deliver Broadband working directly with providers outside the government scheme. The voucher scheme, under pressure from me and others, has been extended and now will provide some respite for the many let down by the failure of Gigaclear to deliver on their contract. Matt Warman the minister responsible was persuaded to come to the West Country to set out what he would do for us – and I made it very clear what that meant! Full fibre is great but in rural communities undeliverable – we need a satellite solution.

Having been lobbying for a Shared Rural Network to extend mobile rural coverage to hard-to-reach areas, the new deal between Government and the phone industry will mean that poor mobile coverage in parts of the constituency and elsewhere will be a thing of the past.

The new plans for all operators to share phone masts to improve UK coverage is a world first. It will mean EE, O2, Three and Vodafone will invest £530 million in a network of new and existing phone masts they would all share and which any mobile user can access and which would be supported by £500 million investment from Government.

It will put an end to the frustration felt by thousands of people who currently feel cut off and mean people will get good 4G signal on the go wherever they live, work or travel and it will have a big impact on the local economy. It will bring coverage to 95 per cent of the UK by 2025 and will go a long way to closing the digital divide that exists across the country in line with the Prime Minister’s pledge to level up the country with world-class digital infrastructure across the country to make sure homes and businesses are better connected.

Connectivity for the South West must be a continual ask of government.

What I Have Delivered So Far:

I was glad to see the Secretary of State for Transport reiterate yesterday that there will not be a Devon and Cornwall only franchise and that any change to the franchise will only be made if it is the right thing to do.

Anne Marie's contribution to the debate on the South West Rail Links in Westminster Hall.

It is good news to hear that the beach management scheme at Dawlish Warren is a step closer to completion.

I was delighted to meet with Chris Grayling on Tuesday to discuss the Dawlish line and make sure it is still on his agenda post-election. He reassured me that he is still committed to delivering for the South West and that he urgently wants to address the Teignmouth Cliffs.

One of the biggest concerns people talk to me about is transport. In a rural area like ours we need a good train service, good road connections and a reliable bus service. But we also need motorist friendly policies as despite all of that, we are very dependent on our cars.

On Tuesday (29th November) Kevin Foster, Sarah Wollaston and I met with CrossCountry trains to discuss the proposed cuts to their services in the South West.

An Autumn Statement for Businesses, Families and Individuals!

Yesterday (23rd November) the Chancellor delivered his Autumn Statement to the House of Commons.